Blog, Health Hints Blog
September 23, 2011 by Robin Nielsen, CNC, BCHN
0
Mushrooms can easily be overlooked because they lack the colorful appeal of fruits and vegetables. But they nonetheless play an important part in a Polycystic Ovarian Syndrome (PCOS) healthy diet. Their benefits range from helping to lower blood glucose and cholesterol levels to easing artery inflammation, reducing stress and boosting the immune system. 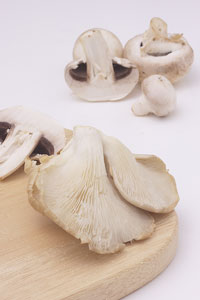 Of all the natural foods, mushrooms are among the most medicinal, with their ability to break down impurities in the body making them natural health allies. Many are available in supplement form but always consult a health care practitioner before taking them.

The presence in mushrooms of two compounds in particular make a big impact on health. Firstly, they have potent anti-biotic, anti-viral and anti-inflammatory agents called terpenoids. Secondly, they have complex sugars called polysaccharides, which enhance the immune system and help the body fight cancerous tumors.

The following varieties of mushroom are well-worth considering as an addition to your PCOS diet in one form or another and are available in most health food stores:

Maitake mushrooms have traditionally been used to help reduce stress. They make a nutritious addition to soups, stir-frys and stews and have been shown to lower hypertension (high blood pressure) and elevated blood glucose levels.

Shiittake protect the heart and boost blood flow, as well as battling a yeast disorder called Candida albicans and increasing the body’s interferon anti-viral substance. For tea or soup, use 6-16 gms of dried shittake. As with all mushrooms, wash off any dirt and remove the stems. Be warned that higher doses can cause diarrhea.

Reishi and Turkey Tail may be too tough to eat but boiling them in water for an hour will produce a strong, nutrient-rich tea or stock for soups and other dishes. Reishi have been effective in tests in reducing inflammation and hypertension, which are key factors in coronary heart disease, though they can can cause occasional dizziness or stomach upsets. Scientists have identified the potential cancer-fighter PSK (Polysaccharide-krestin) in Turkey Tail. Both types of mushroom are available in capsule form.

Cordyceps is thought to lower cholesterol levels, protect the kidneys and improve physical endurance. A relatively rare form of fungus, it is marketed as a dietary supplement.

Buying tip: look for products made in the U.S. that are certified organic and toxin-free. Many products from Asia are tainted with metal toxins.