Large numbers of Americans are resorting to unhealthy habits like overeating in order to cope with stress. Their response to feeling under pressure also includes a lack of exercise. This lethargy is creating further health problems such as excess Polycystic Ovarian Syndrome (PCOS) weight gain and obesity, which, in turn, increase stress levels. 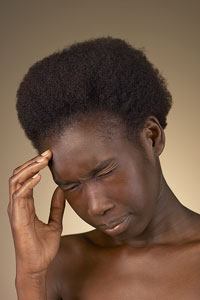 A survey of 2,000 adults by the American Psychological Association (APA) reported that 47% of participants said they were concerned about levels of stress in their lives.

Women were more likely than men to say they were affected by stress. Both men and women who were experiencing stress were less likely to say they were in good health and reported higher rates of obesity, hypertension (high blood pressure) and depression.

Women under stress said they felt nervous, wanted to cry or felt drained of energy. Men reported trouble sleeping and feeling angry or irritable. About one third of women said they turned to food for comfort and roughly a quarter of the men said the same. Those who did seek comfort in food were twice as likely as the average American to be diagnosed with obesity, said researchers.

If left unchecked, obesity can lead to the cluster of cardiovascular diseases called Metabolic Syndrome (Syndrome X), which is a significantly increased risk factor for heart attacks and stroke. Obesity can also be an underlying case of reversible Pre-Diabetes, which, if neglected, may develop into Type 2 Diabetes. This latter disorder can only be managed for the rest of the victim’s lifetime and raises the risk of blindness, amputation and severe kidney disease.

“What’s surprising and alarming is the fact that too many people weren’t taking active steps to do anything about the stress they’re feeling,” said Russ Newman of the APA.”People don’t really appreciate how detrimental stress is, and the ways they’re trying to manage stress can be as detrimental, if not more so.”

Participants who reported higher stress levels were more likely to smoke and less likely to exercise, which might relieve their feeling of stress in the short term but would exacerbate it in the long run, said researchers.

Such habits are hard to break, however, says Tajita Sinha, Director of the Research Program on Stress, Addiction and Psychopathology at Yale University School of Medicine. When a person is stressed, the need to feel better “takes precedence over impulse control,” said Dr. Sinha. “We tend to choose a response based on what we know, based on habit. We will be looking for things that calm us down but they may not be the best thing for us.”

Various forms of stress release the steroid cortisol and this process may result in severe weight gain, quite aside from eating fattening, high carbohydrate “comfort” food.

Insulin sensitivity decreases after certain stressful experiences such as work-related mental and emotional pressure. As glucose levels in the body rise, they stimulate increased insulin production, which has a number of negative effects. In particular, it raises levels of noradrenalin, a stress response hormone released under conditions of emotional upset, which, in turn, can induce Insulin Resistance. This latter disorder is a reversible imbalance of glucose and insulin in the bloodstream, which can become an underlying cause of PCOS weight gain and obesity.

Insulin Resistance and its side effects may promote the build-up of fat throughout the body as well as a rise in cholesterol and blood pressure levels and the formation of artery-blocking plaque.

Excess weight and obesity-linked Insulin Resistance also contributes to the development of Polycystic Ovarian Syndrome (PCOS), the hormonal imbalance which is a major cause of female infertility, as well as skin conditions, excess facial and body hair and male pattern baldness in women.

But don’t despair! Switching to a balanced, nutritious diet can help reverse weight gain, while regular exercise has been proved to have a positive psychological effect on stress-related emotions as well as helping people to return to a healthy weight.