Blog, Health Hints Blog
December 26, 2011 by Robin Nielsen, CNC, BCHN
0
Complicated aerobic exercises can have a great effect on personal fitness. But so, too, can something as simple as walking. 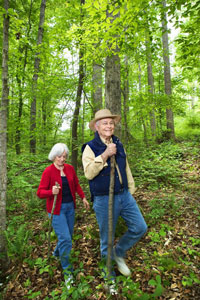 Scientists at the University of Pittsburgh revealed that overweight people who walked briskly for 30-60 minutes a day lost weight even if they didn’t change any other lifestyle habits, though a balanced, nutritious diet is vital for long-term health.

Another study found that people who walked for at least four hours a week gained less weight (an average nine pounds less) than couch potatoes as they got older.

Researchers at the University of Colorado discovered that regular walking helped to prevent peripheral artery disease, which impairs blood flow in the legs and causes leg pain in one-fifth of elderly people.

And walking can apparently even help to prevent colds. Researchers at the University of Massachusetts medical school found that people who walked every day had 25% fewer colds than those who were sedentary.

Because walking is a weight-bearing exercise, it can also help prevent the bone disease osteoporosis. Bones are like muscles in the way that they get stronger and denser with the more demands you place on them. The pull of a muscle against a bone, together with the force of gravity when you walk, will stress the bone – which responds by stimulating tissue growth and renewal.

Best of all, walking makes you feel good about yourself. For people with Polycystic Ovarian Syndrome suffering from depression, walking three to four times a week for 30 minutes has been shown to enhance their mood.

Experts recommend walking 10,000 steps most days (about five miles) to stay healthy. But don’t be alarmed by that prospect because you’re allowed to take as long as you like to work up to feeling comfortable with walking that kind of distance.

Regular exercise when combined with a healthy PCOS diet can help reverse an underlying cause of obesity, namely the imbalance of blood glucose and insulin called Insulin Resistance. By reversing Insulin Resistance, you can facilitate weight loss.