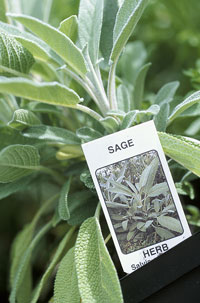 Are fresh herbs and spices always a beneficial addition to your Polycystic Ovary Syndrome (PCOS) weight loss diet when you’re looking for a salt substitute? Here’s the lowdown on some common seasonings and how they could affect your health.

Sage: British researchers have shown that people given sage oil pills on a regular basis experienced a significant improvement in memory. As a tea, sage has been recommended for centuries as a way of easing sore throats and coughs.

Garlic: don’t be put off by the smell because this herb boasts an amazing array of benefits. It is anti-bacterial, anti-fungal, anti-parasitic and anti-inflammatory. Garlic also reduces cholesterol and helps regulate blood pressure and glucose levels – key factors in avoiding the cluster of cardiovascular diseases called Metabolic Syndrome, which is often caused by obesity and the imbalance of glucose and insulin in the bloodstream known as Insulin Resistance.

Garlic can also be used to tackle colds, sinusitis and chest infections, as well as skin problems like acne. But avoid garlic if you are taking anti-clotting medication. If you’re breastfeeding, you may find that garlic makes your baby’s colic worse.

Cinnamon: Pakistani scientists found that extract of cinnamon could improve glucose levels in people with Type II Diabetes. It may also offer protection against the onset of Pre-Diabetes, which is often caused by Insulin Resistance and obesity. If neglected through a poor diet and lack of regular exercise, Pre-Diabetes can lead to the full-blown, irreversible Type II variety. Cinnamon appears to help the body deal with glucose more efficiently.

Ginger: can prevent nausea, so it’s good for treating travel or morning sickness. It also has an anti-inflammatory effect on your blood vessels by lowering blood pressure. Ginger is often taken as a digestive tonic and can help ease colds and flu, chilblains and arthritis. But avoid it if you suffer from a peptic ulcer or gallstones. Long-term use in pregnancy isn’t recommended, either.

Basil: the leaf of this herb, which can be easily grown in a backyard, is a natural antiseptic and great for soothing insect bites. The leaf also provides a powerful antioxidant agent in food.

Curry powder: most people think the worst a curry could inflict is a bout of indigestion. But it could be loaded with unhealthy colorings such as Tartrazine, Sunset Yellow and Ponceau 4R. Repeated exposure to these compounds is thought to lead to increased sensitivity to allergies and even the onset of asthma. However, diets rich in curry spices such as turmeric, often found in Indian food, may prevent some cancers. Tumeric can also ease the symptoms of cystic fibrosis.

So, all in all, it’s best to pick and choose your herbs and spices carefully so your PCOS health receives the maximum benefit.