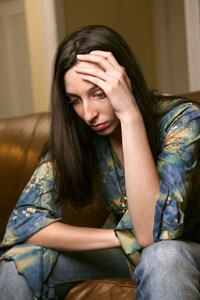 People with PCOS depression have a higher risk of developing Type 2 Diabetes than non-depressed individuals, according to a new study.

The findings, in the Journal of the American Medical Association, indicated that the relationship between Type 2 Diabetes, which is closely linked to obesity and a sedentary lifestyle, may be somewhat like a two-way highway. Not only can Diabetes lead to depression, but the latter can also lead to Diabetes.

U.S. researchers led by Dr. Sherita Hill Golden of Johns Hopkins University School of Medicine in Baltimore tracked an ethnically diverse group of about 5,000 men and women between ages 45-84 for three years.

They found that people with symptoms of depression were 42% more likely to develop Diabetes by the end of the study than those without such symptoms. They also found that the more serious the symptoms, the higher the risk of Diabetes.

The researchers statistically accounted for factors including obesity, smoking and lack of physical activity, finding that the risk for Diabetes was still 34% higher in patients with depression.

This latter hormone can impair insulin sensitivity and encourage belly fat – risk factors, in their own right, for the onset of Diabetes.

The study also measured the risk for developing depression among people who already had Type 2 Diabetes. Researchers discovered that people who had been treated for this condition were 54% more likely to develop depression symptoms than non-Diabetics.

Regular exercise combined with a balanced, nutritious PCOS diet can help reverse an underlying cause of depression-linked excess weight and obesity, namely the imbalance of blood glucose and insulin called Insulin Resistance, which decreases insulin sensitivity. By reversing Insulin Resistance, it is possible to facilitate PCOS weight loss and improve mood.