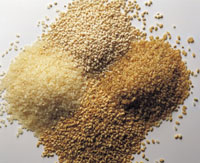 There’s a good reason why, in some countries, the word “to eat” literally means “to eat rice.” The locals don’t need reminding that fiber-rich brown rice, rather than the refined white variety, is one of the world’s healthiest foods.

The process that produces brown rice removes only the outermost layer, or hull, of the rice kernel and is the least damaging to its nutritional value. On the other hand, the milling and polishing that converts brown rice into white destroys 67% of its vitamin B3 content, 80% of B1, 90% of B6, half of the manganese, half of the phosphorus, 60% of the iron and all of the dietary fiber and essential fatty acids.

By law in the U.S., fully milled and polished white rice actually has to be “enriched” with vitamins B1, B3 and iron. But the form of these nutrients when added back into the processed rice is not the same as in the original unprocessed version. At least 11 lost nutrients are not replaced in any form in white rice, even with “enrichment”.

Nutrients are a crucial part of a balanced Polycystic Ovarian Syndrome (PCOS) diet, which, combined with regular exercise, can help reverse Insulin Resistance. This latter disorder is an imbalance of blood glucose and insulin levels, which, left unchecked, can lead to excess weight and obesity. Both of these conditions often underlie Metabolic Syndrome, a cluster of cardiovascular diseases which greatly increase the risk of a heart attack or stroke, and Pre-Diabetes, which, if neglected, can result in irreversible Type 2 Diabetes. Obesity can also cause Polycystic Ovarian Syndrome (PCOS), a leading cause of female infertility as well as skin conditions, excess facial and body hair and male pattern baldness in women.

Brown rice is like a healthy food course all in one item. Just a cup of brown rice, for example, will provide you with nearly 90% of the recommended daily requirement of manganese, a critical component of an important antioxidant enzyme called superoxide dismutase, which protects against cell-damaging free radicals created during energy production.

Magnesium in brown rice helps to lower hypertension (high blood pressure), which can lead to a heart attack. Brown rice may also help raise blood levels of nitric oxide, a small molecule known to improve blood vessel dilation and inhibit damage from cholesterol and the adhesion of white cells to the vascular wall – two important steps in the development of atherosclerotic plaques, which can block arteries and lead to blood clots.

For people worried about colon cancer risk, brown rice packs a double punch, first by being a concentrated source of the fiber needed to minimize the amount of time that cancer-causing substances spend in contact with colon cells. It’s also a very good source of selenium, a trace mineral that has been shown to substantially reduce the risk of colon cancer.

Brown rice can be used in nearly every recipe where white rice is a staple. It makes a great basis for stir-fries and curries as well as being delicious in salads and even rice pudding because of its unique texture and flavor.

When stored in a cool, dry place in an airtight container, brown rice will stay fresh for about five to six months. It can also be stored in a refrigerator where it will retain its special qualities that help to maintain good health.