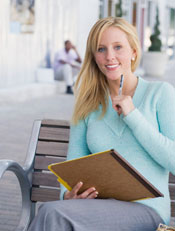 Giving your mental capabilities a regular workout could help you significantly slow down a decline in brain power as the years pass by.

Long-term studies show that some minds stay relatively sharp while other fade dramatically. The key difference may stem from the extent to which each brain is challenged throughout life, says psychology professor Shlomo Breznitz.

“People who engage in challenging tasks – not just at work but during leisure activities such as reading, crossword puzzles, bridge, chess and travel – tend to slow down their the mental ageing process,” added Professor Breznitz, the forrmer president of Israel’s University of Haifa.

State-of-the-art imaging techniques have allowed scientists to watch parts of the brain, which had seemed dormant, suddenly light up in response to new stimuli. In theory, this means brain decay can be halted and even reversed.

But to be effective, mental activity must be progressively challenging, otherwise the brain quickly adjusts and learns to perform familar or repetitive tasks with less effort.

The brain constantly re-wires and re-calibrates itself. As a result, it re-makes itself into a more efficient operating device in order to tackle new and challenging tasks that mentally active people think up for their brains to perforrm.

Regular mental stimulation is thought by some doctors to help stave off cognitive decline diseases like Alzheimer’s when combined with a balanced, nutritious diet and regular exercise to promote healthy blood supply to the brain by avoiding excess PCOS weight gain.

Diet and exercise can help reverse an underlying cause of obesity, namely the imbalance of blood glucose and insulin called Insulin Resistance. By reversing Insulin Resistance, you can facilitate PCOS weight loss.