A bowl of broth could be the missing ingredient in many people’s Polycystic Ovary Syndrome weight loss diet. 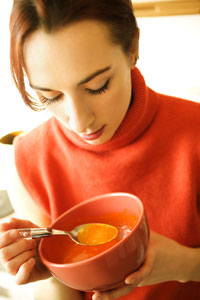 Research shows that people who consume soup at the start of a meal eat less overall – and rather than piling on the pounds, the addition of the extra course can actually help people lose PCOS weight.

The soup regime is recommended by researchers at Pennsylvania State University, who tested it on volunteers. They found that when participants ate a first course of soup before a lunch entrée, they ate less food overall, compared with those who ate the entrée alone.

But the researchers stressed that the soup must be low-calorie. Adding a creamy soup to the meal would be likely to have the opposite effect and lead to weight gain.

The research, supported by the National Institutes of Health, was presented to the Experimental Biology conference in Washington.

Study co-author Barbara Rolls, a professor of nutrition, said the study had built on earlier work on the role of soup as a way of reducing food intake.

“Earlier work suggests that chunky soup may be the most filling type,” she said. “So the purpose of this study was to determine whether different forms of soup might have different effects on food intake.”

Four styles of soup – broth and vegetables, chunky vegetable, chunky pureed vegetable and ordinary pureed vegetable – were studied. The scientists had thought that the thickness of the soup or the amount of chewing required would affect how filling it seemed. But the results showed that it made no difference to the participants’ levels of satisfaction.

In a separate study at the same university, researchers helped children eat a healthier meal by using a similar strategy – slipping vegetables into a pasta sauce to “bulk” it up.

Persuading children to eat vegetables is universally recognized to be difficult. But by including broccoli and cauliflower in sauces as “stealth vegetables,” children reduced their total calorie intake by a quarter, compared to youngsters who ate normal pasta sauce.