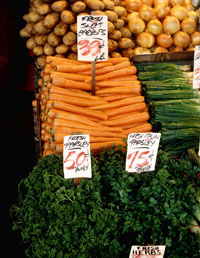 During World War Two, British night-fighter pilots used to be fed extra rations of carrots in the belief that the vegetable improved their vision and so increased their ability to shoot down enemy aircraft in the dark.

There’s no evidence that the R.A.F. pilot’s diet actually helped them to see any better at night. But it is a fact that carrots can aid healthy vision as well as protecting the heart and immune system.

PCOS Nutritionists have long recommended a diet rich in some fruits and vegetables with deep colors because they contain an abundance of nutrients called carotenoids.

One such nutrient is beta carotene, a yellow-orange carotenoid found in many vegetables like carrots and fruits and dark green leafy vegetables. The deep color of plant foods means they are rich in beta carotene, which is converted in the body to vitamin A, or retinol.

Vitamin A is vital for healthy eyes and skin. Beta carotene also contributes to strong teeth, plus healthy hair and a well-functioning reproductive system.

In addition to its role as a catalyst for vitamin A, beta carotene functions as an anti-oxidant, helping to eliminate free radicals that may attack the body’s immune system, causing cardiovascular disease and encouraging tumor growth.

Foods high in beta carotene and low in carbohydrates also include pumpkin and bell peppers. Other good sources are vegetables such as kale, collard greens, spinach, leaf lettuce and broccoli.

Those with Polycystic Ovarian Syndrome may be tempted to take beta carotene in pill form, thinking it offers more powerful protection than its natural counterpart. But many studies have shown that beta carotene supplements don’t offer the same health protection and often contain such high amounts of beta carotene that it competes with the absorption of other carotenoids, disrupting the balance of nutrients in the body.

A nutritious diet is a crucial factor along with regular exercise in helping to reverse Insulin Resistance, an imbalance in blood glucose and insulin which often underlies excess weight and obesity. Being overweight or obese can lead to a number of disorders, including the cluster of increased risks for cardiovascular disease called Metabolic Syndrome (Syndrome X).