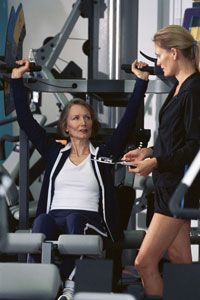 Weight training could be as effective as endurance exercises like running when it comes to burning fat and warding off Diabetes, a study suggests.

Scientists at the Boston University School of Medicine (BUSM) genetically engineered mice to develop a gene that gave them muscles similar to those produced in humans by weight training.

When the gene was turned on, the mice burned up fat and stopped being Insulin Resistant – a condition which can lead to Polycystic Ovarian Syndrome.

The condition of the mice improved despite the fact that they were still eating a diet high in fat and sugar and did not increase their physical activity.

When the gene was turned off, however, the mice became obese and developed liver problems.

The mice grew a certain type of muscle, known as Type II, which develops in humans as a result of resistance training, including lifting weights. This is different to the muscle which forms as a result of endurance training such as running and is called Type I.

Exercise specialist Professor Ken Fox added that attention was increasingly turning to resistance exercise as a means to improve metabolism.

“If you have these muscles, even when you are not doing much, you are still burning up energy,” said Professor Fox.

“It’s a hot topic at the moment. It’s something that could be particularly useful for older people who may have trouble with endurance exercise, and it can be very satisfying because the effects of resistance training appear very quickly.”