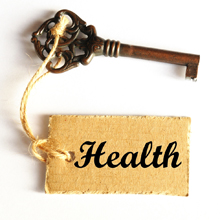 Doctors have a difficult time diagnosing PCOS (Polycystic Ovarian Syndrome) because this disorder is simply a very tricky condition. It presents itself in so many different ways that evaluating the symptoms and drawing the line to the disorder can prove complicated. Many experts today believe Insulin Resistance is the root cause of PCOS, which, in turn, can disrupt your thyroid and impact your TSH (Thyroid Stimulating Hormone) levels. When this happens, thyroid problems can affect your metabolism and make worse many of the problems you’re already experiencing with PCOS.

The good news is you can likely find relief from PCOS symptoms by addressing Insulin Resistance. A healthy diet, a good exercise routine, and inclusion of targeted nutritional supplements can help you combat PCOS.

PCOS: It’s Really About the Hormones

The very name Polycystic Ovarian Syndrome (PCOS) might give the natural impression that this is an ovarian disorder we’re dealing with here, and indeed, women who suffer from PCOS will be the first to attest that it can affect the ovaries in some significant ways. At other times, though, it might not. However, it does often manifest in the form of irregular or absent periods, or periods with excessive bleeding, and at the same time, it can present as infertility and anovulation.4 But to say it’s just about the ovaries would be incorrect.

Actually, it’s about the hormones, and it’s rooted in something called Insulin Resistance.5 This is the condition where the body loses the ability to properly break down and use glucose from the bloodstream. When left untreated, Insulin Resistance can eventually lead to other, quite serious conditions such as diabetes, obesity, and, of course, PCOS.

And for women who do have PCOS (Polycystic Ovarian Syndrome), the problem just might be due to the way Insulin Resistance leads to hormonal imbalances. To be more precise, your body tries to “correct” the lack of insulin being absorbed into your body by producing an over abundance of hormones. This hormonal imbalance can affect many different bodily systems and functions, and is what leads to the myriad symptoms that are associated with this condition (and why some women might have polycystic ovaries while others do not).

Specifically, PCOS (Polycystic Ovarian Syndrome) can cause an imbalance in the production of a hormone called TSH (Thyroid Stimulating Hormone)—but how does a shift in production of this hormone affect your body, and why is it such a crucial part of this disorder?

PCOS and TSH: The Thyroid Connection That Will Amaze You

Although it’s difficult to diagnose PCOS, there are some common hallmarks of this condition—such as irregular periods or trouble with ovulation. But at the same time, it can cause symptoms ranging from hair loss to hair growth, from acne to sleeping disorders. It’s easy to understand, then, why PCOS (Polycystic Ovarian Syndrome) is so hard to pin down.2

But if you’re one of the millions of women suffering from this condition, have you ever paused to consider precisely why the symptoms are so numerous, and why one woman’s case of PCOS (Polycystic Ovarian Syndrome) might look so very different from the next?
The answer might surprise you. Many of these symptoms are directly related to hormones. You might be more surprised still to learn that a hormonal imbalance is frequently tied to problems with the thyroid. And you might be still further surprised to learn all of this might be the result of something called Insulin Resistance—a condition that’s likely behind not only PCOS (Polycystic Ovarian Syndrome), but also diabetes and obesity.3

But what is the link between PCOS (Polycystic Ovarian Syndrome) and thyroid disorders, and what is the role of the hormone called TSH, in particular? Before we come to those questions, we first need to look more closely at the disorder itself and discover why it’s really more complicated than it might seem at first glance. 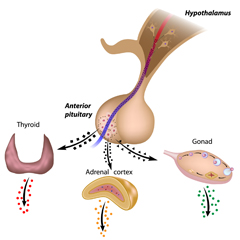 That Insulin Resistance can lead to thyroid problems is something that probably tips you off to how serious this condition really is. After all, we know the thyroid is vital in regulating different bodily functions, and we know when the thyroid isn’t functioning properly it can have serious ramifications. But how much do you actually know about how the thyroid works, and the role of TSH in particular?

But what happens when the thyroid isn’t working properly? The pituitary gland will sense a lack of thyroid hormones and will then move into overdrive, producing even more TSH to compensate for the problem.

And the effects of having either too little (Hypothyroidism)6 or too much (Hyperthyroidism)7 thyroid hormone can be, as you can imagine, quite serious. For one thing, it’s important to remember that these hormones are largely responsible for regulating your metabolism, and that a lack of thyroid hormones in your bloodstream will slow down your metabolism. Is it little wonder, then, that Insulin Resistance is so closely related to both thyroid problems and obesity / excess weight gain?

An imbalance of thyroid hormones can affect your body in other ways, as well. Another potential effect is an increased concentration of testosterone and other sex hormones. It’s the abundance of testosterone that can cause many of the primary effects of PCOS (Polycystic Ovarian Syndrome), including hair loss, baldness, acne, and infertility.

So the bottom line is that, because it disrupts hormones, Polycystic Ovarian Syndrome (PCOS)—and, by extension, Insulin Resistance—is a condition that can affect the body in a number of ways, with many of its effects being quite harsh. Unfortunately, there is little evidence to suggest that ovarian surgeries or diabetes medications—both of which have, at various times, been common treatments for this disorder—can actually have a lasting effect on the condition. But there is some good when you understand that the condition can be rooted in Insulin Resistance. You can begin to see how it can be treated naturally.

Control Your PCOS Through Natural Means

Although there is no single way to cure PCOS, there is hope. Knowing that PCOS (Polycystic Ovarian Syndrome) and its many different effects on your thyroid, hormones, and body can be linked to Insulin Resistance is the key. Through the same natural process of improving your lifestyle, you can lose weight and remedy some of those thyroid problems (and ultimately manage this condition). 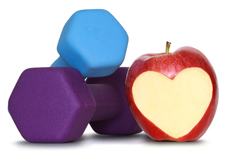 We’ll start with exercise, because it’s so utterly foundational to shaking this disorder. Scientists have shown, time and again, that working out causes your insulin levels to rise. Likewise, it is commonly known and accepted that exercise is one of the best ways to lose weight and boost your metabolism. In short, adding some physical activity to your daily life can have amazing, positive ramifications for your bodily health. Even exercising for thirty minutes a day, five days a week, can pay off big time.

And then there is the matter of diet. Anyone who has some form of Insulin Resistance need only improve their nutrition in order to start seeing results. Start by eliminating refined sugars, processed foods, and fatty meats. Stick to whole grains, too, as best you can. Then, start eating a protein with every meal; a good, lean protein will go a long way toward boosting your metabolism. Also, make sure you’re taking in plenty of fruits and vegetables. The idea here is that you are not starving yourself—you are simply increasing the nutrients you take in.

Another word of advice to beat PCOS (Polycystic Ovarian Syndrome) is to find encouragement and accountability through a support system so you can succeed. That doesn’t mean you have to network and find other women who suffer from Polycystic Ovarian Syndrome (PCOS), necessarily, although that will help. Simply finding another woman to take a walk with you once or twice a week—a woman interested in losing weight and getting healthy—can be a tremendous advantage.

A final point is to make sure to check out the educational resources made available by Insulite Health. Find out how diet, exercise, and targeted nutritional supplements can fight the symptoms of Insulin Resistance. In addition to informative articles, there’s also the complete Insulite PCOS System, an all-natural way to help beat the condition and say goodbye to your thyroid problems and PCOS symptoms.