As with many other conditions, 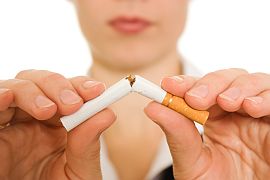 Polycystic Ovarian Syndrome (PCOS) can be exacerbated by certain lifestyle choices. Also known as Stein-Leventhal Syndrome or PCOD (Polycystic Ovarian Disorder), this condition occurs when a woman’s body produces an excessive amount of androgens, or male hormones. The result of this hormonal imbalance is a collection of both physically and emotionally painful symptoms that can prove difficult to overcome. A staggering amount of women suffer from this endocrine imbalance, and smoking can make it much worse by provoking some of its symptoms.

While smoking is unhealthy for everyone, tobacco use is especially unhealthy for women with PCOS. More adverse health outcomes are reported by women with PCOS who smoke than those who have avoided or given up the habit. In short, quitting smoking is one of the best lifestyle modifications you can make when managing your PCOS, along with improved diet and exercise.

How Do you know if you have PCOS?

Similar to other syndromes, 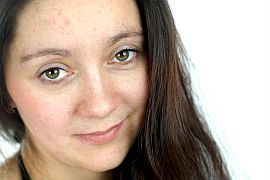 Polycystic Ovary Syndrome has a diverse list of symptoms that vary from woman to woman. In fact, the experience that any given woman has with Sclerocystic Ovarian Syndrome can be completely different from the experience of another. Your symptoms may range from invisible to highly noticeable, from painless to painful

Women who have PCOS are also at a higher risk of developing more serious health conditions, including

Before you can explore PCOS management, it helps to have an understanding of how it’s caused. You already know that Polycystic Ovarian Syndrome (PCOS) 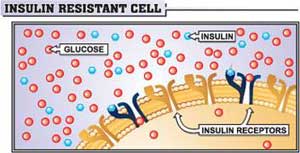 is a hormonal syndrome; however, what you might not know is that the condition is really about insulin. Particularly, it’s all about Insulin Resistance (IR).

When your body loses its ability to properly take in and utilize glucose from the blood stream, the ramifications are fairly dire. When Insulin Resistance isn’t treated properly, it can eventually develop into diabetes or Metabolic Syndrome. This same loss of insulin sensitivity can also lead to imbalance in your hormones and lead to PCOS (Polycystic Ovarian Syndrome). This hormonal imbalance is what ultimately leads to so many different symptoms. So clearly, PCOS treatment starts with understanding Insulin Resistance.

While there is no cure for Insulin Resistance there are PCOS natural treatment plans that can impact your health for the better. In order to combat hyperinsulinemia, which is a form of pre-diabetes, it’s suggested you make a series of changes to alter the way their bodies interact with insulin. If you’re a woman who’s fighting these health issues you’re encouraged to make the following lifestyle changes:

Smoking is a highly addictive activity that 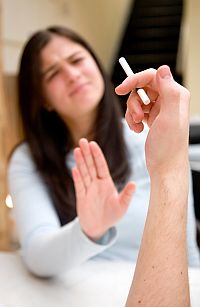 has damaged the health of countless men and women around the world. The first step in fighting for one’s health is to kick the smoking habit and work toward building a healthier lifestyle. But how does quitting Smoking contribute to your battle against Polycystic Ovary Syndrome specifically?

Atherosclerosis occurs when cholesterol, calcium, and other substances accumulate along the arterial walls of the body. Once accumulated, this plaque can build up and cause damage in the form of blood clots, heart attacks, and stroke. Furthermore, a reduction in blood flow to the extremities can result in gangrene if not properly addressed.

In addition to causing these issues, Smoking can actually set the scene for heart and blood vessel disease. When the endothelium, or the inside layer of the artery, is damaged, cholesterol and other plaque-forming substances can more easily accumulate. As they do so, the diameter of the artery narrows. This narrowing forces the same amount of blood through a smaller space, which can increase blood pressure. When in the bloodstream, nicotine and carbon monoxide, which are byproducts of Smoking, can cause damage to the endothelium. This way, Smoking can both cause and exacerbate heart disease.

Women, especially minority women, are already at an increased risk for heart disease because they’re fighting Polycystic Ovarian Syndrome (PCOS). When you add Smoking it can greatly impact their health in a negative way. For this reason, if you’re a smoker, it’s recommended that you quit smoking as soon as possible. Not only is Smoking damaging in general, it can increase the already high risk of heart disease and blood clots for PCOS

Are you looking for PCOS natural treatment plans? Be sure to see what Insulite Health has to offer. As pioneers in natural, lifestyle?based remedies for PCOS we’ve helped countless women meet the challenge of Insulin Resistance. Be sure to explore our educational resources, blog, forum and support groups to see if our natural PCOS System might be your key to optimal health. Insulite Health is dedicated to helping you feel better and possibly reversing your PCOS so you feel more in control of your health. Get your free consultation with one of the Medical Staff on our Consulting and Advisory Team by contacting us today.

Becoming victorious over the symptoms of Polycystic Ovary Syndrome is not easy, but you can overcome your PCOS symptoms to live the life you deserve.

It takes strength, courage, and perseverance. It can be challenging and that’s why Insulite Health created this website. It's has information and resources that will help you balance your hormones and reverse PCOS symptoms.

So take these next steps now! Use the links below to learn how to make the changes that will transform your health and your life forever.

Insulite Health, is committed to helping women reverse their symptoms of hormone imbalance. Scientific research has revealed that this imbalance can be a primary cause of many devastating health symptoms. Hormone Imbalance can also underlie the increased risk factors for PCOS (Polycystic Ovarian Syndrome) - a major source of serious diseases as well as cause of excess weight gain, adult acne, unwanted facial hair, depression, anxiety, and heartbreaking female infertility.

©Insulite Health, Inc., pcos.com empowers women with PCOS to transform their lives through a process of healing with the 5-Element PCOS System – a complete solution for helping women reverse the symptoms of PCOS and hormone imbalance.