Simply believing you are exercising while you work can help you become thinner for PCOS health, according to researchers.

Women who do physically demanding jobs and are aware of the potential health benefits of their work lose more weight and have lower blood pressure than those who do the same jobs but do not realise the positive side-effects. 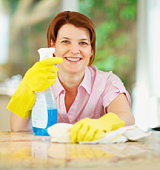 Psychologists at Harvard University studied 84 women who worked as hotel housekeepers, cleaning rooms and changing sheets. They found many were worried that they were not doing enough exercise, even though their jobs are physically demanding. The researchers pointed this out to half the women, telling them they were doing enough exercise through their job to lose weight and stay healthy.

The other half were told nothing about the health benefits of their daily chores. After four weeks, those told they were doing lots of exercise at work had lost two pounds on average, lowered their blood pressure by almost 10% and shed almost 0.5% of their body fat.

The other group experienced no noticeable changes in their health or physique, according to the study published in the journal Psychological Science.