Gay women could be at greater risk than heterosexual females of suffering from Polycystic Ovarian Syndrome (PCOS), the potentially dangerous hormone imbalance linked to Insulin Resistance.

Obesity caused by the Insulin Resistance symptoms of high blood glucose and high insulin levels can lead to PCOS. Polycystic Ovarian Syndrome can also expose sufferers to a higher likelihood of developing Pre- and Type 2 Diabetes, as well as the cluster of increased risks for cardiovascular disease called Metabolic Syndrome (Syndrome X).

A 2004 study presented at the 19th European Society of Human Reproduction and Embryology conference showed that a large majority of lesbians seeking fertility treatment at a London clinic suffered either solely from polycystic ovaries (ovaries with attached, fluid-filled cysts or sacs) or from the multiple symptoms of full-blown PCOS, ranging from ovarian cysts to external manifestations like acne and excess facial hair.1

Dr. Rina Agrawal, deputy medical director at the London Women’s Clinic, examined 618 women who attended the clinic for fertility treatments between November 2001 and January 2003. Of these, 254 were lesbian and 364 were heterosexual.

The women did not know they had Polycystic Ovarian Syndrome before attending the clinic. But 15 percent had been treated previously for symptoms relating to PCOS, such as irregular periods, inability to conceive, and excessive body or facial hair.

The women had a pelvic ultrasound examination on the second or third day of their menstrual cycle, and blood samples were taken to measure levels of reproductive hormones. A clinician, nurse, counselor, or clinical psychologist took details of their medical and sexual histories in three separate sessions.

Dr Agrawal said the high levels of the condition among gay women meant that “doctors should be on the lookout for its telltale signs among their lesbian patients in order to make sure their wider health is not at risk.”

Hyperandrogenism is caused by abnormally high concentrations of androgens (male steroid hormones in women). Symptoms can range from excess facial and body hair, to baldness, acne, deepening of the voice, and loss of breast tissue. 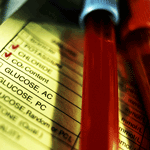 “There are several challenges and gaps in the research and healthcare of gay people and this in itself calls for focus and funding of this aspect of medicine. In the past 20 years, only 0.1 percent of published articles were dedicated to the healthcare of gay individuals. Before 1990, gay people were invisible to healthcare research.

“Our study emphasizes the importance of treating these women in a non-judgmental and non-biased manner, so that clinicians may offer them appropriate health advice.”

As an underlying cause of PCOS, Insulin Resistance prevents the efficient conversion of blood glucose (or sugar) into energy because the cells walls-the means of entry for the body’s fuel-have been de-sensitized to insulin. 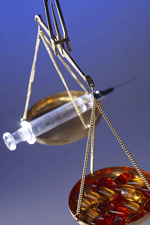 Insulin acts as the “key in the lock,” allowing glucose to pass through the cell wall and be converted to energy. When there is insufficient insulin sensitivity in the cell walls, glucose “bounces off” the cell wall, instead of passing through it as the insulin “doorway.” Glucose then remains in the bloodstream, causing elevated levels of blood sugar, which is sent to the liver. Once there, the glucose is converted to fat and stored via the bloodsteam throughout the body.

The end result can be weight gain or obesity-both linked to the onset of PCOS. Compounding the problem, excess insulin caused by Insulin Resistance then stimulates the ovaries to produce large amounts of the male hormone testosterone, which can then prevent ovulation each month.

Doctors often misdiagnose PCOS. This situation became a significant concern after a University of Pittsburgh study published in 2000 found that individuals with PCOS have a higher risk of developing cardiovascular disease.2 Researchers discovered an increased association between Polycystic Ovarian Syndrome and atherosclerosis, which occurs when fatty deposits called plaque cling to the interior walls of the arteries.

Not only do PCOS sufferers have higher rates of plaque build-up but those older than 45 also have thicker deposits of plaque. In addition, the imbalance of glucose and insulin levels found in women with Polycystic Ovarian Syndrome leads to a lowering of “good” cholesterol and an increase in the level of triglycerides, which are fat-storing substances carried through the bloodstream to the tissues. These factors can also increase the risk of cardiovascular disease.

PCOS and Insulin Resistance-linked obesity are causative factors behind infertility. The Insulite PCOS System is specifically designed to lower testosterone levels and reduce weight gain by addressing the symptoms of PCOS. This can be accomplished by adopting the five elements of the Insulite PCOS system in your lifestyle – (1) Diet and Nutrition, (2) Movement and Exercise, (3) Nutritional Supplements, (4) Insulite Support, and (5) Insulite Awareness. By combining and implementing these five elements, it’s possible to help re-establish the delicate balance of your hormones, thereby increasing your overall health and wellbeing.