The effects the four hormones estrogen, progesterone, follicle stimulating hormone (FSH), and luteinizing hormone (LH) have on your body.

Although many women take it for granted that their ovaries play an important role in the female reproductive system, the majority of them do not understand how essential their ovaries are to the proper functioning of the female body. In fact, women who suffer through Polycystic Ovarian Syndrome (PCOS) often do not realize the importance of their ovaries until they begin to research their condition.

What role do the ovaries play in PCOS?

As surprising as it may be, it is true that women do have male reproductive hormones naturally in their system (and men have female reproductive hormones). The proper balance of these hormones is what maintains a functioning reproductive system in both men and women. But when a woman begins to produce too many androgens (male hormones) she can quickly develop Polycystic Ovarian Syndrome (PCOS) and start to experience some of the devastating symptoms this condition can produce. Some of these symptoms include: infertility, hair loss, polycystic ovaries, abdominal and pelvic pain, hirsutism, depression, anxiety, acne, dandruff, dry skin, skin tags, and fatigue.

How Do the Ovaries Fit Into the Scheme of Things?
The ovaries are involved in Polycystic Ovarian Syndrome in three major ways:

This being said, it is clear that the ovaries play two very important roles: the role of egg storehouse and the role of hormone manufacturer. Estimated to be the size of an almond, these relatively small glands play a major part in a woman’s life. 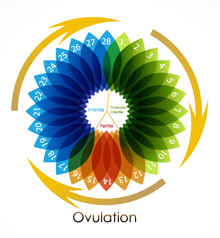 How the Ovaries Function
On the day she is born, a woman’s ovaries hold all of the eggs she will ever produce. Stocked with between 200,000 and 400,000 eggs, starting at puberty the ovaries will release one egg every month in anticipation it will be fertilized and a baby will be created. Ovulation, or the release of an egg every month, will continue until a woman reaches menopause, at which time her ovaries will stop releasing eggs and will become a bit smaller.

In order to properly ovulate, ovaries must have the necessary amounts of the female sex hormones they produce. These hormones trigger the preparation and release of each egg, but if the levels of the sex hormones present in a woman’s body are off kilter, the ovulation process can be disrupted. This is exactly what happens in women who have Polycystic Ovarian Syndrome.

What Hormones Do the Ovaries Produce?

The female reproductive system depends on several different hormones to function properly; however, there are four major hormones that must be balanced and accurately produced in order for ovulation, conception, and the development of a child to occur. These four include: estrogen, progesterone, follicle stimulating hormone (FSH), and luteinizing hormone (LH). FSH and LH are produced in the pituitary gland, a small gland in the brain; estrogen and progesterone are generated within the ovaries themselves. Sex hormone production occurs elsewhere in the body as well. Estrogen and progesterone are both produced in smaller amounts in the adrenal glands. During pregnancy the placenta secretes progesterone. Other sources of estrogen include fat cells, arterial walls, and the brain.

Estrogen: When you think of characteristics generally considered to be feminine, you are thinking of those caused by estrogen. From body shape to hormonal patterns, estrogen is the major female sex hormone. A few of the things this hormone is responsible for include:

Progesterone: The predominant hormone after ovulation, progesterone is released by the empty follicle from which an egg has just been released. This empty follicle is called the corpus luteum. When it is released, progesterone stimulates the uterus to prepare for the implantation of a fertilized egg. If the egg does not become fertilized, meaning conception does not take place, the corpus luteum involutes causing a sharp drop in hormone levels. Subsequently, the uterus sheds its lining and the egg during menstruation. Some other responsibilities of progesterone include:

Both estrogen and progesterone are important aspects of a well balanced reproductive system. In women with Polycystic Ovarian Syndrome (PCOS), sometimes the levels of these two substances are too low when compared to the levels of androgens, or male hormones, which are present in the system.

Have you noticed symptoms that might point to PCOS?

PCOS creates a great many different physical issues that vary from woman to woman. This combination of symptoms can make PCOS difficult to diagnose.
Some commonly seen symptoms of PCOS include:

Other possible indicators of PCOS can include excess male hormones that are defined by elevated androgen levels in the blood, insulin resistance, and elevated serum levels of luteinizing hormone (LH). It is important to get a definitive diagnosis of PCOS because long-term risks of PCOS can be serious health conditions such as type 2 diabetes and cardiovascular disease.

How Can Women With PCOS Control Their Hormones?

The problem is that controlling the production and release of hormones can be very difficult, and is not always possible; however, there are several treatment options that women with Polycystic Ovarian Syndrome (PCOS) can consider.

First and foremost, doctors can prescribe birth control pills to women with this condition. Although birth control pills do not affect the underlying cause of PCOS, they regulate the levels of estrogen and progesterone and help women regain a regular menstrual cycle, which can improve the quality of life of women with PCOS.

Additionally, supplemental progesterone can be used for women whose levels are low. There are several different ways it can be taken, including as a pill, a vaginal suppository, or a cream. Not only can an increase in deficient progesterone levels increase the likelihood of conception, it can also help prevent endometrial cancer, and for pregnant women, progesterone supplementation can help prevent miscarriage.

Getting to the Core of the Problem

Unfortunately for the millions of women who struggle with this condition on a daily basis, there is no magic medicine that can cure Insulin Resistance. It is reversible, but only through old fashioned hard work, which entails a nutritious diet, a rigorous exercise program, and targeted nutrition supplements.

The diet and exercise programs recommended for women with Insulin Resistance are subjective, relying largely on their own dietary needs and physical limitations; however, all women should abide by the following guidelines:

Although it can seem very difficult to regulate hormone levels and create a normal life when dealing with Polycystic Ovarian Syndrome (PCOS), there are ways to balance hormones and regain the sense of normalcy this challenging condition almost always takes from its victims.