You have probably heard plenty of horror stories about parasites. From world-record breaking tapeworms that cause serious life-threatening problems for some people, to ticks transmitting Lyme disease, we encounter parasites on a regular basis.

Unfortunately, diagnosing the existence of a parasite in your system can be incredibly difficult. Though we can use blood tests, fecal examinations, colonoscopies and x-rays to search for parasites when symptoms begin to appear, many people may currently be living with a parasite without any knowledge whatsoever. In fact, estimates suggest that 85% of all Americans have some manner of parasite living inside of their body – commonly within the intestinal tract.

As international travel becomes more common, the rate of parasitic infections has grown within the United States, and across the globe. Parasites can cause a range of symptoms depending on their type, including constipation and heartburn, vomiting, and in very rare, yet severe cases, even death.

What are parasites, and how can we get rid of the uninvited visitors that could be plaguing our systems? 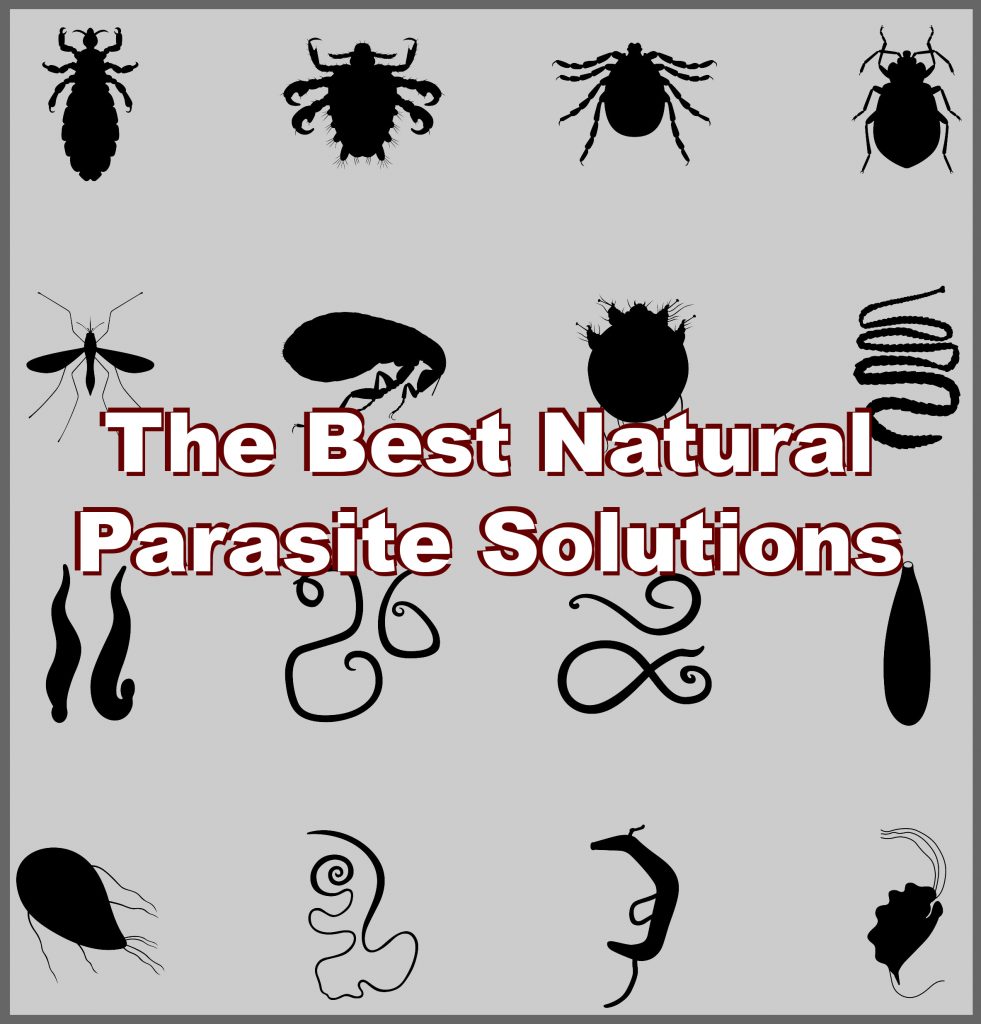 AN INTRODUCTION TO PARASITES

The average human body is crawling with hundreds of different strains of bacteria and yeast. Before you panic, however, that is entirely normal. Remember, the digestive tract alone holds over three pounds of bacteria. When this bacterium is properly balanced, they can be essential for promoting nutrient absorption and good digestion. However, when an intruder steps into the mix, then problems can begin to occur.

Parasites can range from microscopic organisms that are invisible to the naked eye, to huge tapeworms that measure several feet in length. These parasites can enter your body in a multitude of different ways, sometimes through contact with animals, infected people, or infected portions of food and drink. When they are ignored, and treatment is not provided (as is frequently the case for some parasites), an infection can last for years, and even lead to chronic disease.

Those most likely to suffer from a parasitic infection include:

While some infections are easily treated, others are incredibly difficult to remove from the system once a parasite has taken hold.

THE DANGERS OF PARASITES AND WHAT CAUSES A PARASITIC INFECTION?

Some parasitic infections cause very minor symptoms, which means that people can live with the parasitic intruder in their system for several years without even recognizing the infection. Alternatively, some very dangerous forms of parasites can lead to fatal, and long-term health implications when they are not quickly and effectively treated.

For instance, recent research suggests that:

Lyme bacteria (the bacteria often transmitted by ticks), can hide inside of parasitic worms and eventually cause chronic brain-based diseases.

An infection caused by a parasite can spread in a variety of different ways. For example, helminths and protozoa can spread through contaminated food and water, or even contaminated blood. Some of these parasites may also be passed on through sexual contact. There are some parasites which are spread by insects that act as a carrier for their disease, for instance, malaria is caused by a parasitic protozoon frequently transmitted by mosquitos.

Parasites are dangerous because they destroy the tissues present in their host, and cause significant damage, as well as producing their own toxic products in waste that can lead to various debilitating health problems. Many hosts suffer from infections, discomfort, and disease as a result of a parasitic infection. Parasites in humans can cause a variety of significant issues, such as skin rashes, fatigue, diarrhea, anemia, and more. It’s estimated that up to 100 different types of parasitic worms alone can be found within the human body.

HOW TO TELL IF YOU HAVE A PARASITE

Parasites can be a significant problem in subtropical and tropical regions of the world. However, as mentioned above, the amount of parasitic infections that are present across the globe today is increasing in part because of the increase in international travel. The most common parasitic infections that are found in the United States generally include toxoplasmosis, giardiasis, trichomoniasis, and cryptosporidiosis.

Parasites in humans can cause a range of very serious problems. The transmission of Lyme disease can sometimes lead to chronic disease, whereas the deadliest parasitic infection, malaria, can sometimes have fatal results. In less drastic cases of parasitic infection, symptoms can range all the way from issues of anxiety and nervousness, to skin rashes, fatigue, diarrhea, anemia, and more.

Commonly, the symptoms that an individual will experience because of a parasitic infection will vary depending on the organism that has entered their system. For instance: 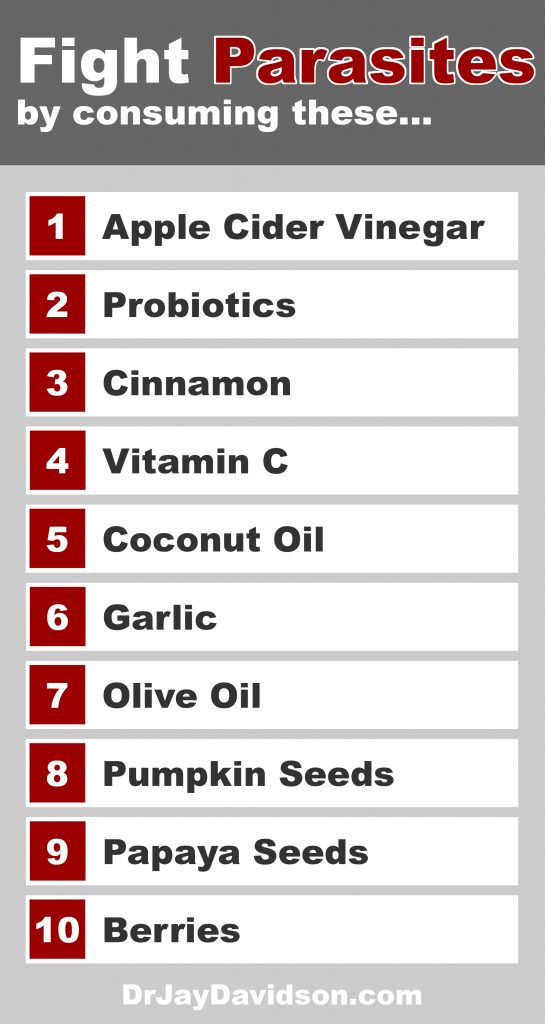 Often, a treatment plan for a parasitic infection will depend on the specifics of your diagnosis. Some doctors may prescribe medications that will help to kill off the parasite, but it’s also important to note that this is only one part of the comprehensive approach to overcoming a parasitic infection. One of the most important things that you can do when overcoming a parasite, is to make sure that you are following the correct dietary precautions. Eating the right foods, and avoiding substances that might strengthen the parasite, can limit your symptoms and help to remove the infection from your system as quickly as possible. After all, the parasite eats the same foods as you do, and the items you choose will either nourish, or destroy them.

Most experts recommend that if you do have a parasite, your first step should be to stay away from grains and sugar as much as possible, including natural sources of sugar like honey and fruit. Remember, removing a parasite is a difficult job for the human body, and during the process it’s crucial to make sure that you are supporting your system with regular exercise, plenty of sleep, a good diet, and limited exposure to toxins. Ideally, it’s a good idea to invest in foods that will help to eliminate parasites from your body for good. These foods will form part of your parasite cleanse:

Apple cider vinegar is full of B-vitamins, making it great for nourishing the body. It can support a natural pH and lead to improved digestion. As Apple cider vinegar has been found to be particularly effective at killing parasites, it is recommended to take one teaspoon up to three times per day.

Probiotics are the “good bacteria” that help to restore the healthy gut bacteria in your system that may have been wiped out by parasites or antibiotic use. Probiotics are essential for restoring intestinal flora, even after a parasite has been removed. Avoid taking them within an hour of apple cider vinegar.

A delicious spice that can be used to deliver a range of fantastic health benefits, cinnamon has also been proven, alongside ginger, to be a natural remedy for certain forms of parasite. Mixing ginger and cinnamon into a cup of tea or smoothie could be a good way to get your regular daily dosage. However, make sure that any smoothies are free from dairy to help promote quick intestinal recovery.

Vitamin C is an excellent substance for supporting the immune system, and is also a powerful antioxidant. However, what most people don’t know is that vitamins are also very useful in parasite removal. The literature recommends that if you suffer from symptoms of parasites, then you should be taking about four grams of vitamin C every day. It is important not take it at the same time as magnesium or calcium, as the nutrients may neutralize each other.

Coconut oil is a perfect example of a natural anti-fungal, and it’s also highly nourishing for the body. If you’re not using it in your cooking by this point, you could consider adding several spoonfuls per day into your diet to help promote good digestive function. Coconut oil can also support human hormones and the reproductive system.

Garlic is highly effective at helping to rid the system of parasites and yeast. In order to get a healthy amount into your body each day, you might consider mincing one or two cloves of garlic into a glass of water to drink between meals.

Olive oil is yet another type of anti fungal that can support the removal of yeast and parasitic waste. Add between one and two spoonfuls into your food, perhaps on items such as vegetables and salads, on a daily basis.

Pumpkin seeds are perhaps the most valuable substance you can consume when it comes to getting rid of parasitic infections for good. Capable of indirectly killing tapeworms and various other forms of parasites, pumpkin seeds should form an essential part of any parasite cleanse. These seeds work because they contain a substance known as curcubitine – a property which can paralyze tapeworms so that they are incapable of holding onto intestinal cells.

Another highly effective seed-based cure for parasitic infections. Papaya seeds have plenty of great anti-parasitic qualities thanks to their content of papain – an enzyme that helps to break down parasites. According to a study published in the Journal of Medicinal food in 2007, parasites were eliminated completely from the stools of 77% of children given a combination of honey and dried papaya seeds, compared to an eradication of only 17% in those given the honey alone.

Finally, though it’s important to be cautious with your consumption of berries because they are high in sugar when fighting off an infection from a parasite, it’s worth noting that various berries have been used as a traditional remedy for fighting back against intestinal parasites. The effectiveness of berries is often linked to the chemicals present within them known as polyphenols – which can be found in all plants.

Foods to Remove From your Diet (Don’t Feed the Parasite)

Of course, there is more to a parasite cleanse than simply knowing which foods you should be eating. Cleansing is also about removing dangerous foods from your body that might be having a negative impact on the healing process, or reducing your chances of removing the parasitic infection from your system completely. In order to kill parasites in your body and remove the bad bacteria that these parasites often consume, you will need to remove as much bad bacteria from your gut as possible, and this begins with eliminating grains and sugars from your diet.

A good parasitic cleanse will always involve removing all grains, processed foods, and most forms of sugar from your diet. Many experts suggest that you limit your intake of fruit wherever possible too.

The ultimate foods to avoid during your cleanse include:

Remember, while your parasite treatment will often depend on the type of infection you have, the way in which you manage your diet through a full parasite cleanse will help you to rid your body of these dangerous creatures.

Join the Natural Solutions for PCOS Online Conference right now, where you can hear Jay’s interview! 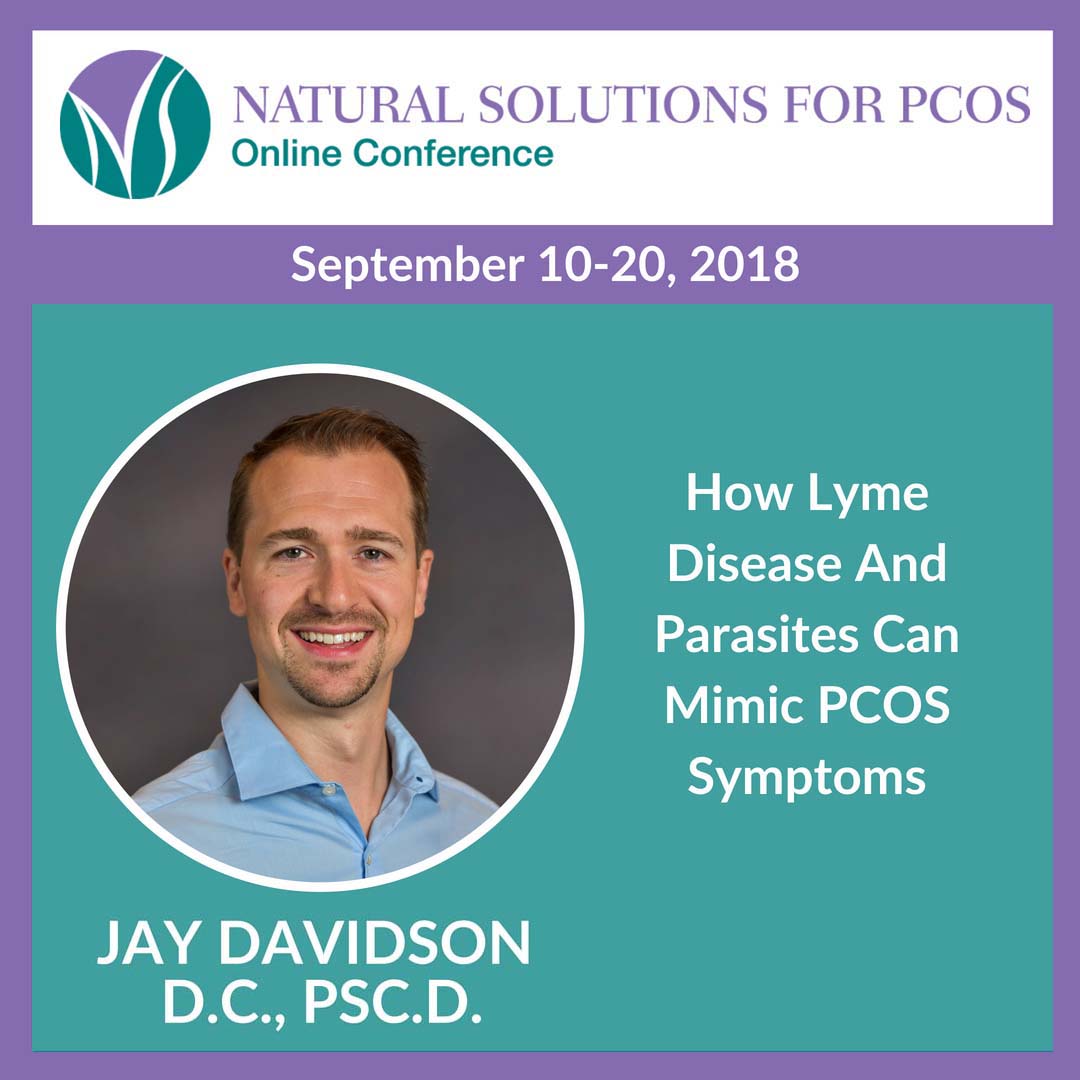