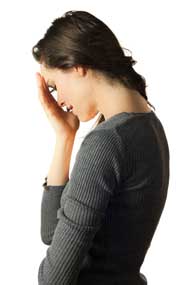 is a condition that 5-10% of women experience. If you suffer from PCOS you face a higher risk of depression than the general population. Doctors often prescribe anti-depressant medications to treat this debilitating symptom, PCOS Depression. But are these medications safe? Are they safe for women trying to become pregnant? And since antidepressants aren’t effective for all patients, what are the alternatives if these medications fail? Conventional western medicine doesn’t approach PCOS (Polycystic Ovarian Syndrome) as a single condition to be managed since there are no PCOS drugs that solve the problem. They instead use a PCOS treatment that focuses on the collection of symptoms and treat them individually. Antidepressants can control some PCOS symptoms, but a natural treatment for PCOS is most often helpful. It works best when coupled with lifestyle changes like a healthy diet, more exercise, and/or herbal supplements to combat an underlying influence of PCOS, which is Insulin Resistance.

What Are PCOS and Depression?
Polycystic Ovarian Syndrome (PCOS) is an endocrine disorder that results from an increased amount of androgens, or male hormones, in your body. Many experts point to Insulin Resistance as the underlining problem. I.R., as it’s also known, is a condition that reduces the sensitivity of your body’s cells to insulin. Insulin allows the glucose (blood sugar) into your bloodstream that creates energy. During insulin resistance, these same cells slowly become ‘immune’ when your insulin spikes or surges too often. These ‘spikes’ are usually caused by a daily diet of refined carbohydrates. In the end, PCOS symptoms are the result.

Depression: What Is It?
Everyone feels down now and then. Depression, however, is an illness. 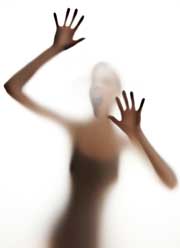 According to the Medical Dictionary of MediLexicon, depression is defined as, “‘a mental state or chronic mental disorder characterized by feelings of sadness, loneliness, despair, low self-esteem, and self reproach; accompanying signs include psychomotor retardation (or less frequent agitation), withdrawal from social contact, and vegetative states such as loss of appetite and insomnia.'” Although relatively short-lived feelings of depression are normal, longer-term bouts with the condition can negatively impact daily life. If you’re a woman who’s fighting Polycystic Ovarian Syndrome (PCOS) you may find yourself having difficulty functioning normally on a day-to-day basis due to a depressive disorder, or clinical depression.

Why are women who have Polycystic Ovarian Syndrome (also known as Stein-Leventhal Syndrome) prone to developing depression? The symptoms that accompany this disorder are highly stressful, both physically and emotionally. Symptoms like weight gain can deplete your self-esteem and cause embarrassment. Other symptoms, like infertility, can make you question your femininity because your body doesn’t represent modern social ideals. Depression, then, may occur as an emotional response to these physical issues.

Depression is an umbrella term that encompasses several different forms of the disorder. These include:

Major Depressive Disorder and Dysthymic Disorder are among the most common forms of depression. However, determining the correct form of depression in a woman who has Polycystic Ovary Disease requires open communication with healthcare professionals. While this condition may increase the risk of depression, depression can occur on its own as a separate problem.

Symptoms of Depression
Just like Polycystic Ovary Syndrome, depression invokes a variety of symptoms that may appear in unique clusters from one individual to the next. These symptoms include:

Anti-depressants may improve some of these symptoms, but others, like bodily pains, may not get any better once you begin your medication.

To counteract the effects of depression, many women who have Polycystic Ovarian Syndrome (PCOS) may be prescribed antidepressants. These medications are available in a variety of forms, some of which may cause adverse reactions with other medications or foods. In order to ensure that the medications prescribed don’t interact with other prescriptions or dietary regulations, you’re encouraged to be open and honest with your doctors about your condition, the medication you’re hoping to procure and the goals for your pharmaceutical therapy.

Pharmaceutical companies have developed a variety of drugs that can help ease the effects of depression. Although some popular medications don’t fit in these three categories, the most common kinds of antidepressants are: monoamine oxidase inhibitors (MAOIs), selective serotonin reuptake inhibitors (SSRIs), and tricyclics.

Monoamine Oxidase Inhibitors (MAOIs)
Being the first antidepressants developed, MAOIs have been largely replaced by more modern, less interactive medications. Because they can cause perilously high blood pressure when combined with certain foods and other medications, MAOIs are not often the first anti-depressants prescribed to a woman who has Polycystic Ovarian Syndrome (PCOS). However, MAOIs are a viable alternative for patients who have adverse reactions to the more current medications on the market.

Selective Serotonin Reuptake Inhibitors (SSRIs)
SSRIs are the most common antidepressants on today’s market. Many doctors prescribe them because they present with fewer side effects and when weighed against other choices are considered to be, generally, safe to take. Additionally, they can alleviate depression that ranges from moderate to severe. 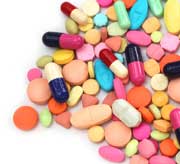 After being released by a nerve ending into a synapse, the neurotransmitter serotonin then undergoes reuptake, during which it’s pulled in by the nerve ending on the other side of the synapse. SSRIs allow serotonin to spend more time in the synapse, and more time improving mood, by preventing the reuptake function. While MAOIs affect three different neurotransmitters (serotonin, norepinephrine, and dopamine), SSRIs target serotonin only.

Tricyclics
Older than SSRIs but more current than MAOIs, tricyclics are often the second option for to alleviate their depression in women with PCOS.

Common Side Effects
While tricyclics and SSRIs present fewer side effects than MAOIs, all of these medications are capable of causing reactions. There is still quite a bit of debate about the safety of antidepressants when it comes to pregnancy and lactation though so it’s best to talk to your doctor if you’re trying to conceive or if you’re breastfeeding.

Aside from that, here are some of the most common side effects that may occur when taking an antidepressant:

The individual categories of antidepressants may present unique side effects, like:

Polycystic Ovarian Syndrome / Stein-Leventhal Syndrome is a condition that can cause a range of symptoms. Depression is a common side effect of these symptoms, as they can be exceedingly stressful and painful, both emotionally and physically. If you’re suffering through this disorder you may need to turn to antidepressants to manage your mood and allow you to fully function on a day-to-day basis. Fortunately, the described antidepressants are often able to improve mood and allow women like you facing this devastating condition the ability to move forward in the fight for their health.

Help with PCOS and Depression the Natural Way

Can natural therapies cure depression? Possibly. According to a case report by UCLA, treating PCOS can positively impact depression sufferers. As the study explained, “We present the case of a young woman with treatment-resistant major depression, who presented to the Mood Disorders Clinic with a Hamilton Psychiatric Rating Scale for Depression (HAM-D-21) score of 28, after a year-long treatment with Effexor-XR. The patient also had untreated Polycystic Ovarian Syndrome (PCOS). The resolution of her depressive symptoms resulted from the treatment for PCOS with metformin and spironolactone. The patient remained euthymic 5 months after discontinuation of the antidepressant while continuing therapy for PCOS.”

Now remember, every depression sufferer is different, but as stated above, addressing the symptoms of PCOS might play a much larger role in aiding depression than previously thought. So, what should you do if you suffer from PCOS? Again, combating Insulin Resistance is the first step. You can do that by eating healthier.

Best of all, this diet doesn’t need to be extreme—just healthy. Don’t starve yourself. In fact, eat plenty of the right foods and ample amounts of the right nutrients. Make sure to get a good, lean protein with every meal too, as well as a number of fruits and vegetables. Be sure to include whole grains when you can and cut refined sugars and processed foods. Physical activity is important too. Ideally, it means working out for half an hour a day, five days a week.

Insulite Labs is here to help you manage your lifestyle changes and provide the needed supplements so you can address your PCOS head on. With the right plan, you can take control of your life so PCOS isn’t in control of you. Explore our site to learn about Insulin Resistance or contact one of our experts for more information today.