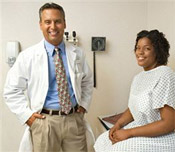 Yesterday we began to explain why liposuction is unlikely to boost your PCOS health, even though it offers the prospect of dramatic weight loss.

Some level of fat is absolutely essential for good health. But many people get into trouble when they have exhausted their body’s ability to store more calories in fat (adipose tissue). We all have a certain threshold to which our fat storage depots can expand. When we get to that point, fat cells become so big that they are no longer able to buffer excess calories and thus cannot protect other tissues from fat accumulation and damage. This is when many of the classical metabolic problems of obesity become apparent, like increased blood fats and elevated blood glucose levels.

When we expend more energy via exercise or reduce the amount of food we ingest through diet, or both, our body draws on extra stores of energy in adipose tissue and this process gradually reduces the size of the individual fat cells. That means  fat loss occurs due to an overall reduction in size of fat cells throughout the body, not a reduction in the actual number of fat cells in a specific area like the waist area or thighs.

Liposuction consists of the latter process, where a large number of fat cells are removed from the body. That is, you reduce the number of fat cells but the remaining ones don’t get any smaller or healthier. In fact, the opposite may be true because there is less place to store excess calories than before liposuction, so there is enlargement of those fat cells left behind.

A study investigated the health effects of liposuction of subcutaneous (under the skin) fat in the abdominal region in 15 obese women. The liposuction procedure removed between 30%-45% of the subcutaneous fat in the abdominal region, which was equivalent to approximately 10 kg of fat tissue. This represented a 20% reduction in total fat mass – a very substantive change.

However, with regards to the women’s health, the results were disappointing. Specifically, 12 weeks after the surgery the women did not show improvements in any of the metabolic markers of disease risk  – notably insulin sensitivity, which is crucial to improving PCOS and which, when impaired, can lead to diabetes, heart-damaging high blood pressure and elevated blood glucose levels. Nor was there improvement in any other indicators such as CRP, adiponectin, IL-6 and TNF-?.

Thus the conclusion was that, while liposuction may be of benefit for cosmetic reasons, it should not be considered a clinical treatment for obesity, which is often linked to PCOS. In other words, surgically removing fat tissue will not bring about the same health benefits of weight loss as a balanced, nutritious diet and regular exercise, which can greatly improve PCOS health.