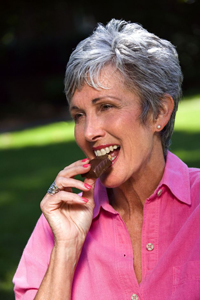 Does a craving for chocolate play havoc with your Polycystic Ovarian Syndrome weight loss diet? If so, it may be that your habit is harder to kick than you imagine.

Brain changes in chocoholics that occur when they see or eat chocolate are similar to those in addicts when they take drugs, according to a report in the European Journal of Nutrition.

Researchers found certain regions of the brain were more active when people, who confessed to cravings, were fed or shown pictures of chocolate than in non-cravers.

They also discovered the sight of chocolate contributed significantly to the activation of brain areas associated with reward, suggesting that people trying to lose PCOS weight could cut their intake by avoiding the sight of foods they particularly desire.

Professor Edmund Rolls and colleagues at the University of Oxford’s experimental psychology department in England carried out functional magnetic resonance imaging (MRI) on the brains of eight chocoholics and eight non-cravers. All the participants were women.

The volunteers were shown appetizing pictures of chocolate and then fed liquid chocolate while having MRI scans. Among chocolate cravers, greater activity was seen in the medial orbitofrontal cortex, pregenual cingulated cortex and ventral striatum – regions of the brain known to be involved in pleasure sensation, habit-forming behaviours and drug addiction.

Damage to the orbitofrontal cortex acquired through brain injury has previously been associated with compulsive gambling and excessive use of alcohol and drugs.

Professor Rolls said: “Individual differences in brain responses to very pleasant foods help in the understanding of the mechanisms that drive the liking for specific foods and thus intake of those foods.

“Sight and flavor combined give a much bigger response than seeing or tasting the food separately. The sight component is important and complements the flavor,” he added.

Eating a lot of chocolate can be a major factor in gaining excess PCOS weight and becoming obese. But a balanced, nutritious diet combined with regular exercise can help reverse an underlying cause of obesity, namely the imbalance of blood glucose and insulin called Insulin Resistance. By reversing Insulin Resistance, you can facilitate weight loss.