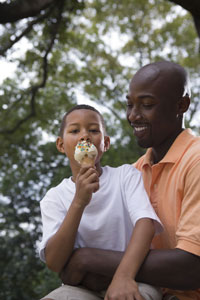 Obesity is spreading like wildfire among young people, with kids often wanting junk food before they are old enough to read.

But this fascination with unhealthy food that can make them fat isn’t inborn. Instead, the desire is implanted via a continuous barrage of advertising aimed specifically at children, according to a new report.

A study by the Kaiser Family Foundation found that 75% of all ads aimed at young children and teenagers were peddling candy, snacks, sugary cereal or fast food. Children aged between 2 and 7 see, on average 12 food ads a day from various sources, which grows to about 4,000 a year, said the report.

Advertisers attract their attention by using popular characters like SpongeBob SquarePants and Shrek to sell everything from Burger King hamburgers and french fries to Pop-Tarts and Skittles. The American Academy of Pediatrics and other groups are calling for a ban on this kind of advertising.

In an effort to head off such a ban, 11 major food and beverage manufacturers have  formed a coalition to regulate their own advertising pitches. Although activists are skeptical, the coalition claims that, henceforth, members will commit at least half of their children’s advertising to healthier products.

Overweight children and adolescents have a much greater risk of becoming obese as adults than kids of normal weight. Regular exercise when combined with a balanced, nutritious diet at any age can help reverse an underlying cause of excess weight and obesity, namely the imbalance of blood glucose and insulin called Insulin Resistance. By reversing Insulin Resistance, you can facilitate weight loss.

If left unchecked, obesity can also lead to the cluster of increased risks for heart disease called Metabolic Syndrome (Syndrome X) as well as Polycystic Ovarian Syndrome (PCOS) – a leading cause of menstrual irregularity, acne and other skin conditions, excess facial hair and female hair loss. Overweight adolescents do not have a monopoly on PCOS, however. Up to 50% of PCOS sufferers may be females who are of normal weight or even lean.

Insulin Resistance-linked weight problems are also associated with Type 2 Diabetes, which is being seen at an increasingly younger age. Before the onset of this latter condition, however, most people develop reversible Pre-Diabetes, a condition in which blood sugar levels are elevated beyond normal but not high enough for a diagnosis of Type 2 Diabetes.

Left unchecked, Pre-Diabetes may lead to the Type 2 variety, which can only be managed for the rest of a person’s life. Many Diabetics require daily injections of insulin.

Over the long term, Type 2 Diabetes severely increases the risk of blindness, amputation and kidney disease, as well as a heart attack or stroke. Some 90% of people with Type 2 also suffer from excess weight or obesity.